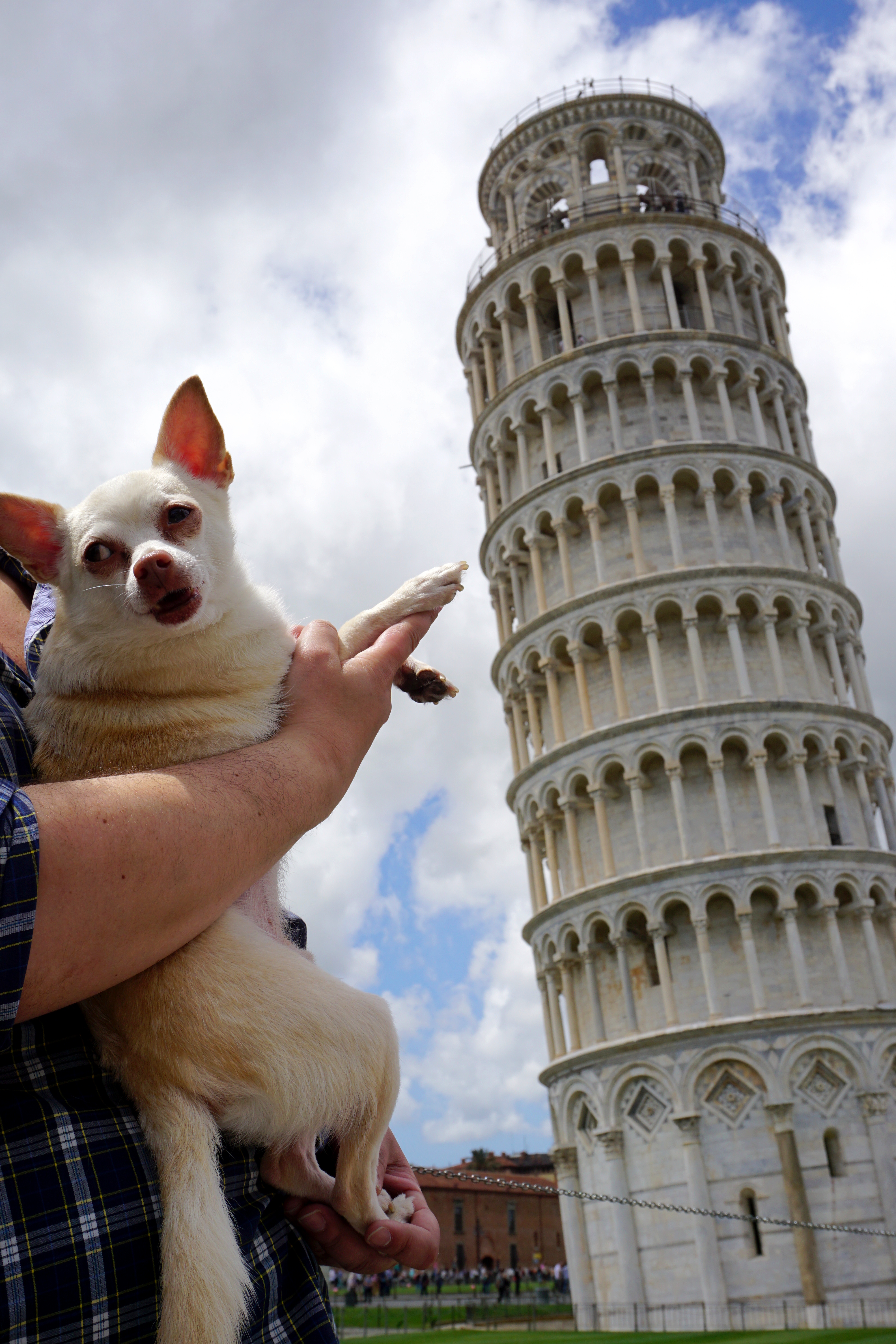 A Day Trip to Pisa, Italy with a Dog

What trip to Italy would have been complete without a cheesy photo of us “holding up” the Leaning Tower of Pisa? With Pisa being only about an hour and half train ride from Florence, I figured it would make a wonderful little day trip for us and the pup. Well, actually, the day trip turned into a half day once we realized there wasn’t a lot to do in Pisa. We booked our train in advance and it only cost us $16 total. Like on all the trains we took in Italy, Coco was free of charge and had to be in his carrier bag (if the dog is too big to be in a bag he must wear a muzzle and leash). We left the carrier at the baggage storage in the train station so we wouldn’t have to carry it around all day. Make sure you have either a health certificate or a pet passport for your dog because they usually ask for it.

We actually missed our first train because we didn’t realize you can’t flag down a taxi you see driving by (they let us take the next one with no extra charge). You must call a cab company in advance to book one. Luckily, my boyfriend Daniel spoke a little Italian because the man who answered the call couldn’t speak English. Note that we were in Florence and Uber is only available in Rome and Milan.

When we arrived to the Pisa Centrale station we set off by foot for about a 30 minute walk to the leaning tower, after stopping for a delicious espresso at Tiffany Cafe right across from the station. With no surprise, Coco was welcomed inside the cafe with water, like most we went to in Italy. Walking seemed to be the less popular route to take the tower making our way peaceful and more enjoyable.

Located on the Arno riverbank, we stumbled across this gorgeous tiny 14th century Gothic Church called the Santa Maria Della Spina. Unfortunately, it was closed at the time so we couldn’t explore the interior. In 1333, a relic from the Holy Land was acquired by the church. The relic is said to be a thorn (spina) from the crown worn by Christ during the crucifixion.

On both sides of the river near the church, there were two beautiful marble lion statues.

When we arrived at the Leaning Tower of Pisa, we noticed it wasn’t the only building struggling to stand up straight- the round large Baptistery tilts as well. In fact, many buildings in Pisa lean a bit because the soil is rich in sand and clay. You can’t bring your dog inside but you could always take turns if you are with another person.

Next to the Baptistery was, yet again, another leaning medieval building- the Pisa Cathedral. The marbled building was so finely worked on it looked almost like embroidery! Once Coco saw people go into the Cathedral, he was determined to make his way in and see what delicious treats were waiting for him…because that’s his life now. Since moving to Europe, going into buildings (restaurants) and getting a little snack became the norm for him.

With much disappointment and confusion, the leash wouldn’t let him go into the Cathedral, but that didn’t stop him from taking a little peek through the beautifully carved doors and sniffing out for chicken. Once satisfied the building had nothing to offer, he was ready to move on.

The only down side to Italy is there isn’t much grass for dogs to run around on so it was pleasant surprise to see such a big patch of it in Pisa. After a good long sniff and pee, he was ready for more adventures.

We had a good laugh watching people fall down, karate chop, and hold an empty ice cream cone under the tower (while licking the air). I might be biased but I think our version was the best.

Next to the Baptistery we came across Italy’s oldest medieval walls. Construction began in 1155 and the wall still remains almost completely intact after all these years! We wanted to climb the wall and walk the 3km around the city but the entry gate we tried was closed for some reason.

There is a great little market where you can buy anything from wine and sausage to souvenirs next to the wall. There were many other dogs there!

We knew we had to try the famous L’Ostellino for, what people said, is “one of the best sandwiches in Italy” before heading back to Florence.

Of course Coco got a little piece and I think he would agree that it was one of the best sandwiches we have ever had.

What I found out with our trip to Pisa really surprised me. Not only did I not think it was an overrated tourist trap, I actually really liked it. I still say about a half day is sufficient to see the city. If you are already planning on visiting Florence anyways, it’s such a short cheap ride to Pisa, that it’s worth checking it off on the bucket list. Even though you can’t take your dog inside the Tower, Baptistery, or Cathedral it’s totally understandable and it’s still amazing to explore the outside with a dog.