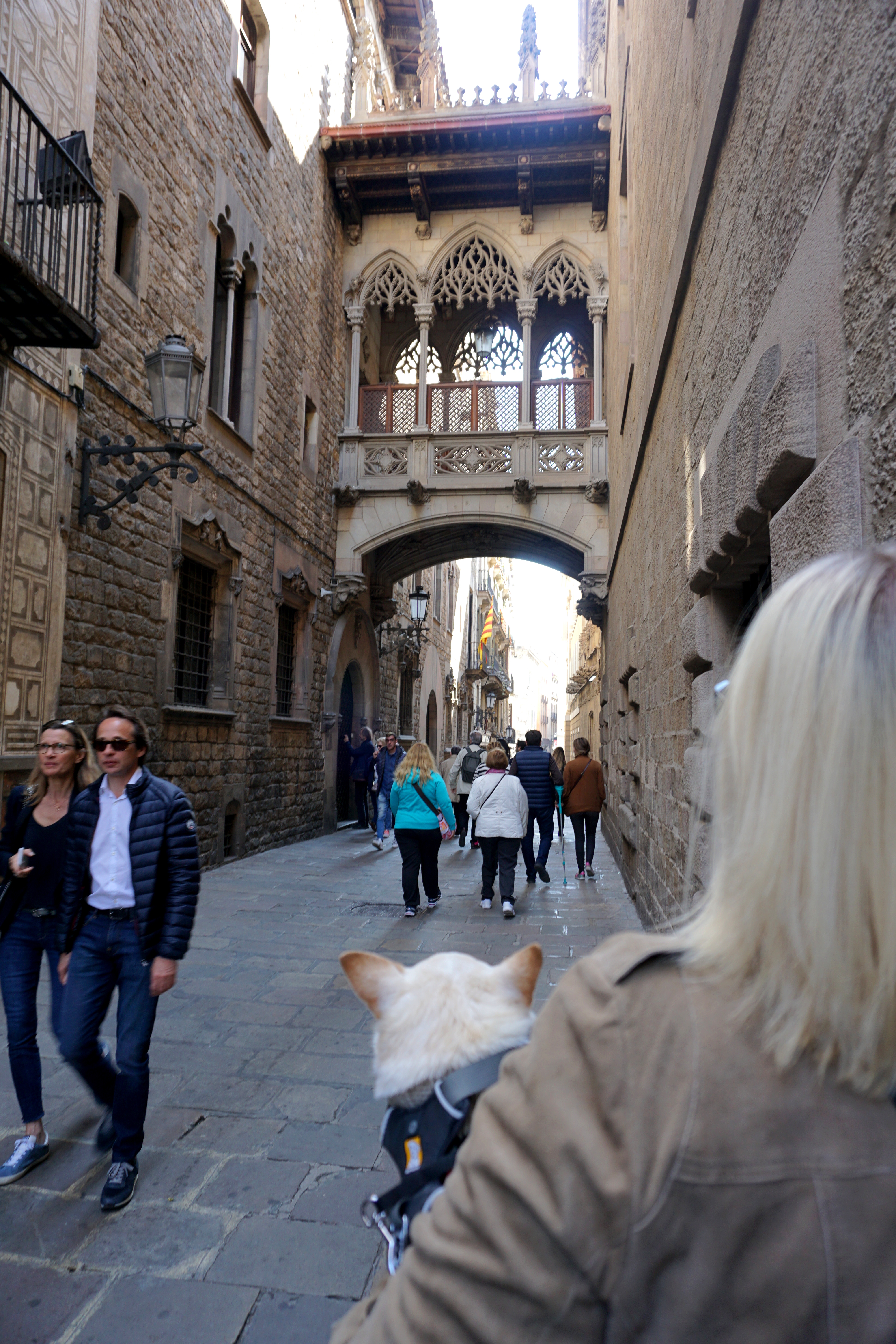 Just a few steps from El Borne, lies the oldest part of the city, the Gothic Quarter. Located in the heart of the city, this Barcelona neighborhood has buildings dating back from Roman times to the 20th Century.

We came across this stunning Gothic Cathedral of Barcelona in the Gothic Quarter. The current building was constructed during the 13th and 15th centuries on the ruins of an ancient Roman cathedral.

The area in front of the Cathedral was very lively and filled with entertainers. We loved listening to this Spanish Guitarist!

This Joan Brossa’s sculpture, next to the cathedral, spells out Barcino. Barcelona was founded as a Roman Colony called Barcino. Right next to the sculpture is one of the Roman Gates, behind me, and a great way to enter into Barcino in the Gothic Quarter. There are remnants of two defense towers straddling the Roman Gates.

Large sections of the Roman walls of Barcelona (Barcino) as the colony from the time of Emperor Augustus (27 BC to 14AD) are still visible. If you want to walk the perimeter of the wall with your dog it’s 1.4km in distance.

A few steps before entering the gate, you might come across locals doing the sardana dance (the everyone is welcome dance).

Out of the four Roman gates built, only the Portal del Bisbe (Bishops Gate) still stands today. While walking through this gate, we felt as if we were transported into a medieval town with the cobbled streets and narrow walkways. These streets get crowded very easily so I carried Coco until it was safe for him to walk.

There was still plenty of the Roman wall to see along Carrier de la Tapineria with Coco.

This round Roman tower in (Plaça dels Traginers), above picture, was in one of our favorite areas of the Gothic quarter. This Traginers square is hidden between streets and is the perfect mix of Gothic and peace.

We loved going to Traginers Square when we wanted to get away from the stress of the city and have a lovely dinner. It doesn’t get any more charming having Tapas and local wines next to a 4th century A.D. Roman Gothic tower with my boyfriend and chihuahua.

My favorite thing about the Gothic quarter is how the narrow and dark streets could open up into such bright and spacious squares filled with life.

The plaza or square has been the center for public life in Barcelona for centuries. Many have restaurants and bars with outside seating where you can relax with your dog. Many also have unique sculptures or monuments, like this high stainless steel chicken wire sculpture, in the picture above.

Las Ramblas is located right next to the Gothic Quarter and is one of the most popular tourist destinations in Barcelona. It was full of street sellers, performers, and over priced restaurants. Since most tourists head here, pick pocketing and purse snatching is frequent. We weren’t a fan of this area and it was too crowded to let Coco walk around. Out of our month long stay in Barcelona, we only came here once.

Before heading off to dinner, we stopped next to Ciutadella park to see the Arc de Triumf. This Triumphal Arch was built as the main gate to the world exhibition of 1888.