Edinburgh is an amazing place to visit with a dog. Recently named UK’s greenest city, it has plenty of space to explore. The one place you wouldn’t want to miss is Holyrood Park (Queen’s park). The park has been pretty much unchanged since the 16th century when it was enclosed as the Royal Park.  At the foot of the Royal Mile and next to Holyrood Palace in Holyrood Park, lies Arthur’s seat which sits at the top of an extinct volcano in the largest green space in Edinburgh. 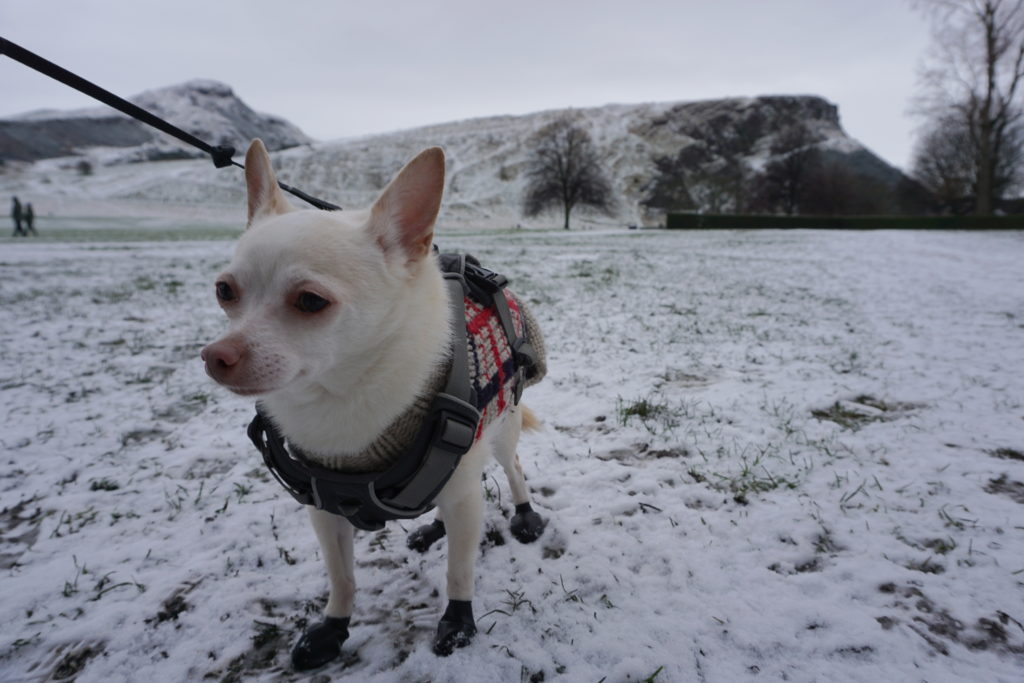 We had a amazing view of Arthur’s Seat from our Airbnb apartment once the snow settled. We enjoyed it but Coco was not much of a fan. He seemed uncomfortable the moment I placed him in the snow. He lifted each paw up one at a time as if his paws were too cold and tried to kick off his booties.  He looked at the other dogs perplexed as they ran freely in the snow without a care in the world and then preceded to scratch my leg until I picked him up. After this picture was taken I decided to take off those torture devices and place him back in his warm sling where things made sense. 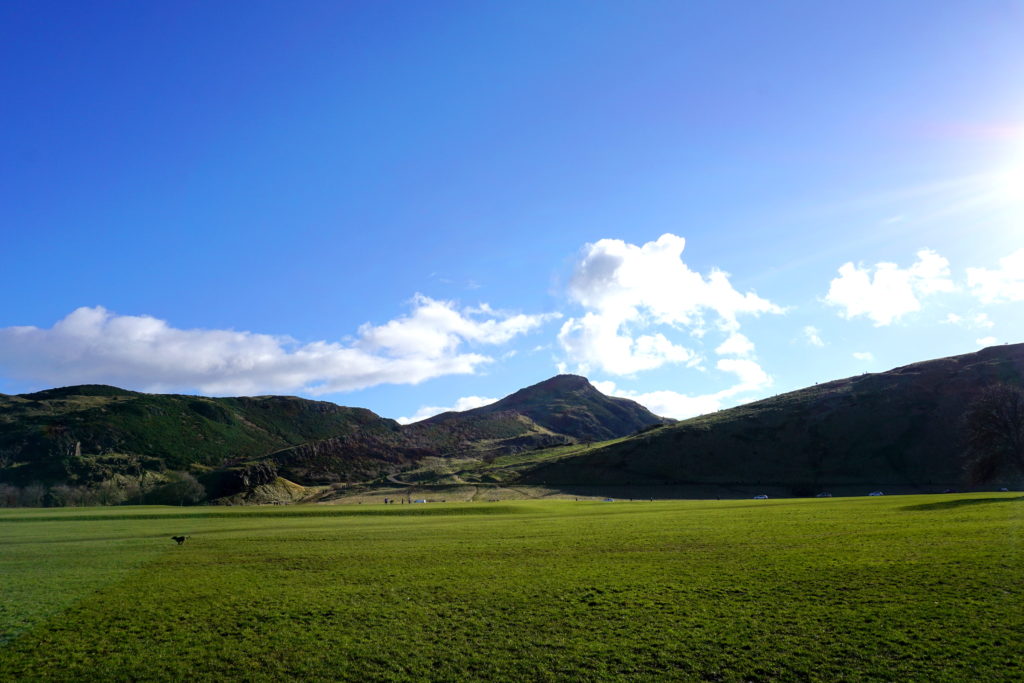 This photo was taken a week later when the weather warmed up a bit. When the park isn’t covered in snow it looks a bit different. 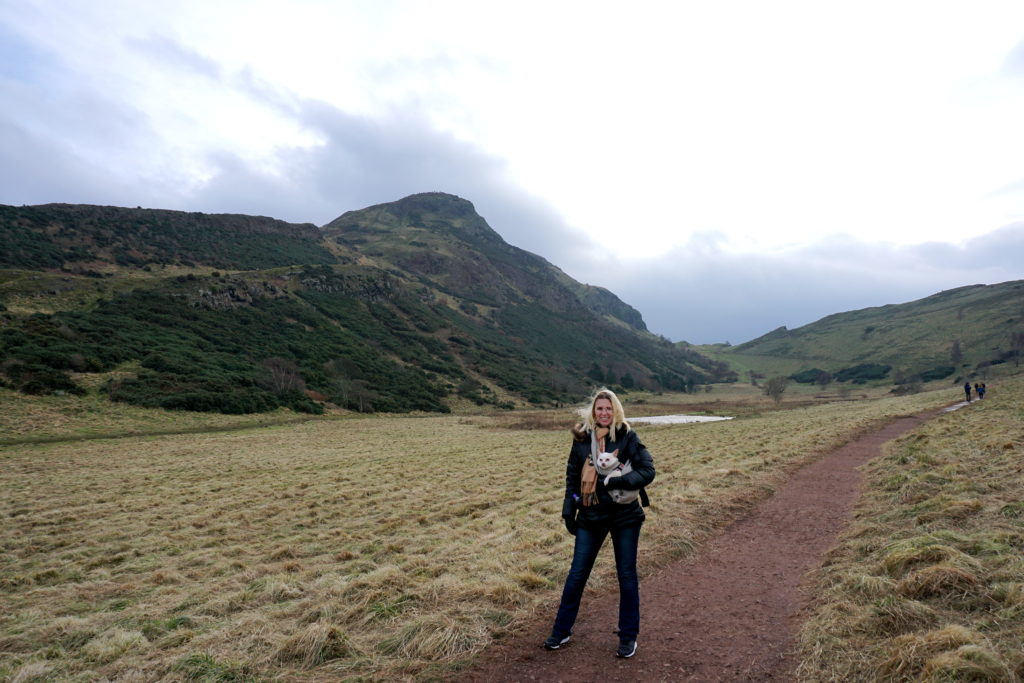 The first attempt to walk up Arthur’s Seat with the pup was unsuccessful due to the very windy weather and my unacceptable shoes . There were stone steps we tried to walk up that lead to the top of Arthur’s Seat but were uneven and slippery even though it hadn’t rained. We decided to skip it for now and continued to take another path in the park that wasn’t up a steep hill. I would recommend wearing appropriate hiking shoes when taking that pathway up. 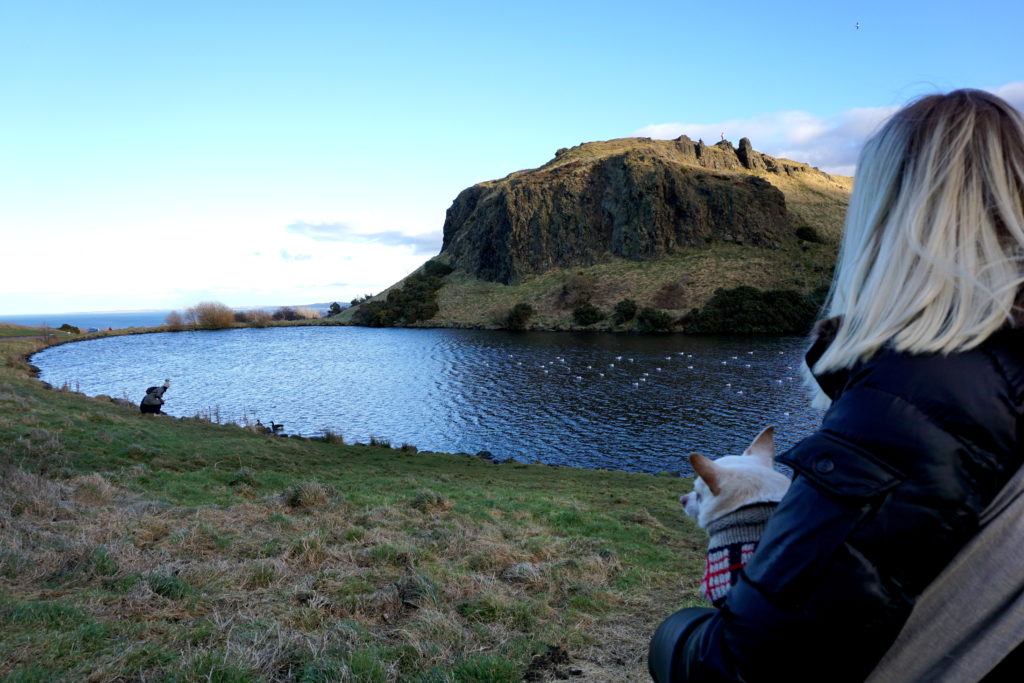 Continuing down the path we came across Dunsapie Loch. This reservoir was home to a variety of wildfowl including geese, swans, and ducks. 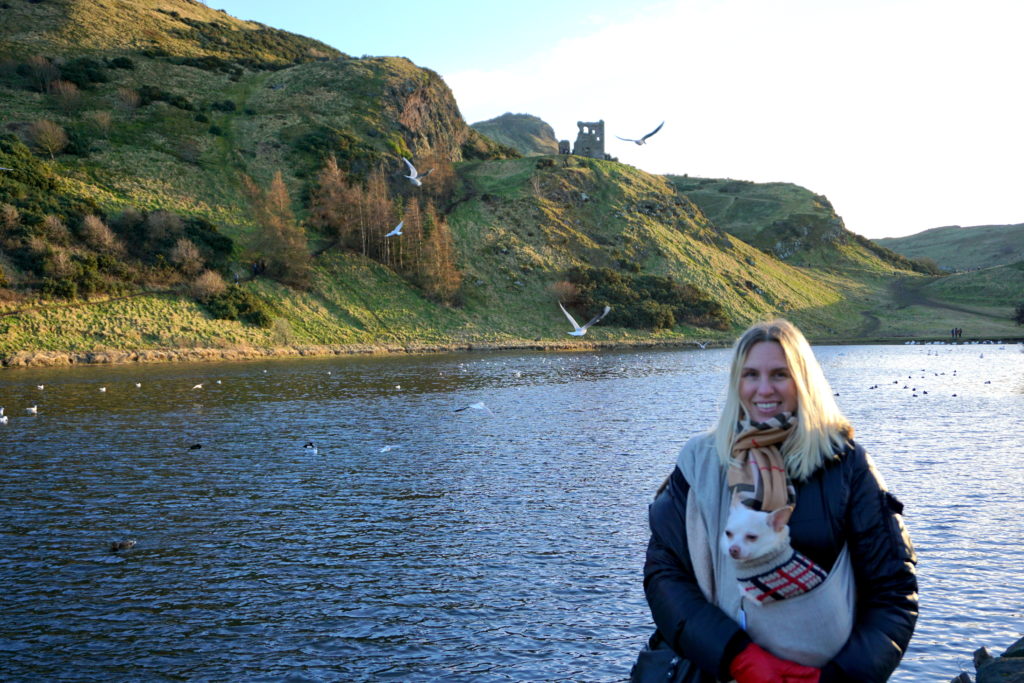 At the end of our walk we came across St. Margaret’s Loch, which was also filled with geese, swans, and ducks. The ruins of St. Anthony Chapel stands above the Loch. If you don’t mind the steep walk up the stoned staircase, you will see it on the left for a closer look. 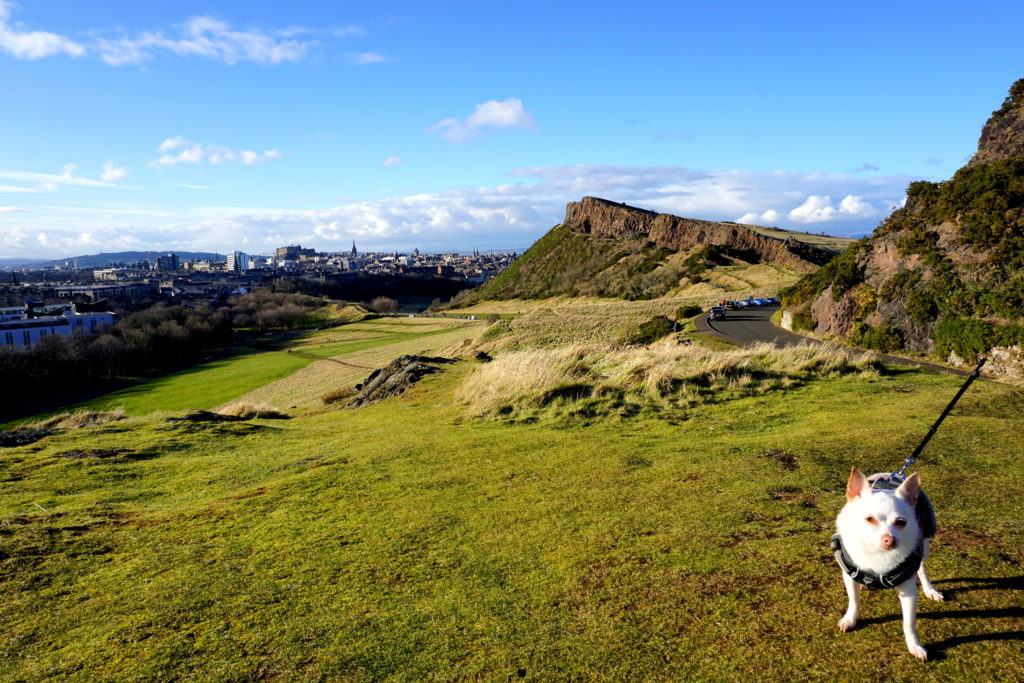 A few days later we returned to Holyrood Park with better weather and better shoes. 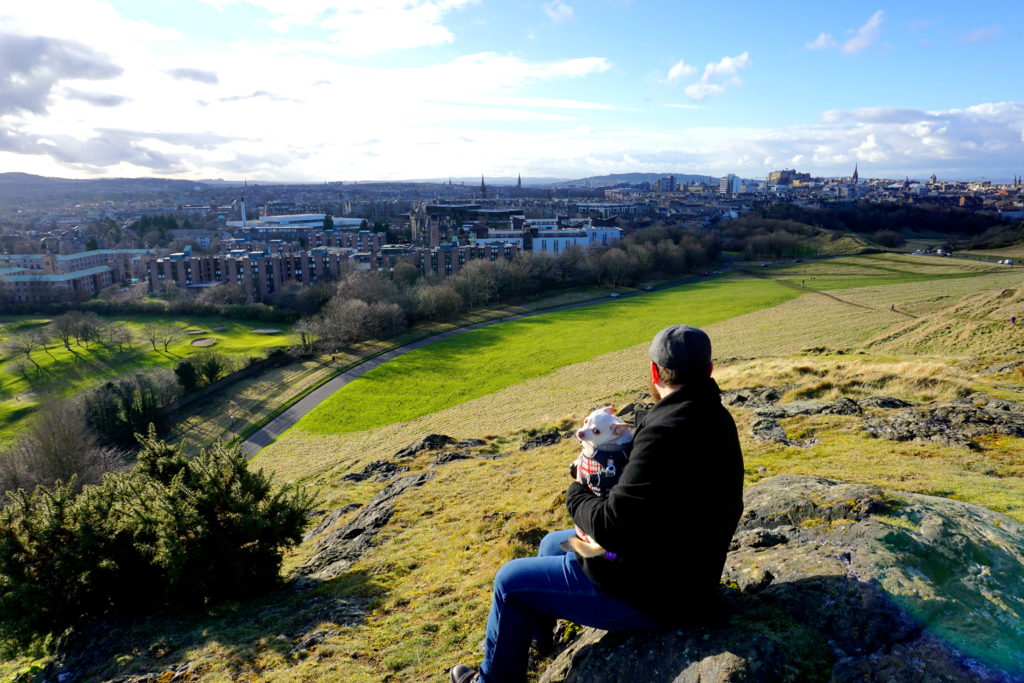 When you walk up to the park near the Palace, you will come across the stone steps to your left and you will see a little more friendly path up to your right. We took the one on the right which was perfect for our dog to walk on his own. 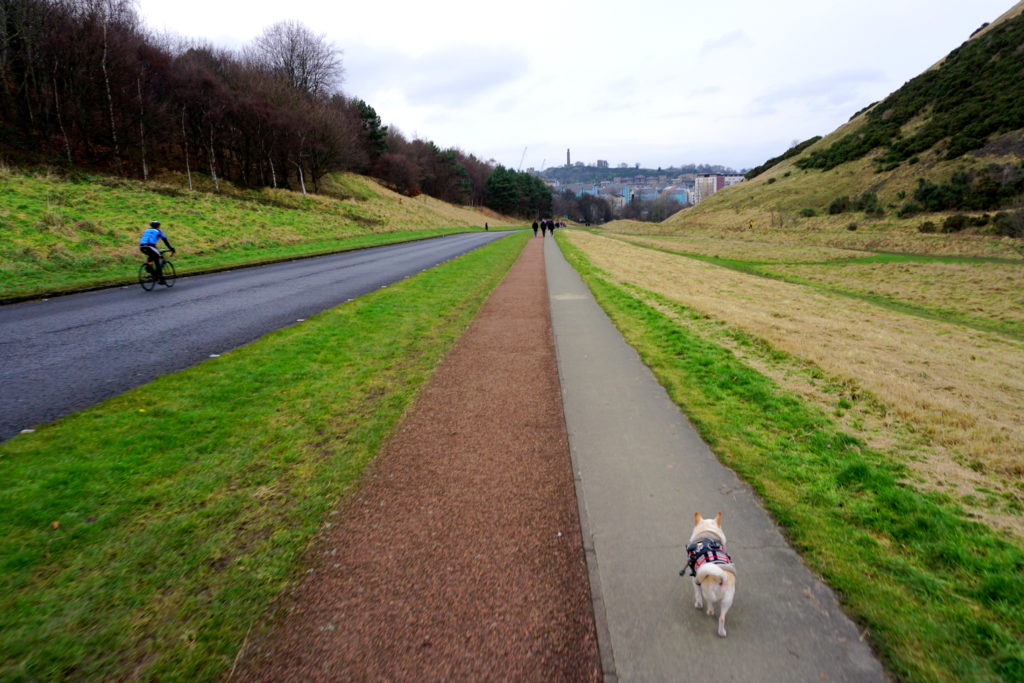 The Queens Drive surrounds the park and makes for a great walk with the pup. It is also filled with bicyclists so we had to watch for them while walking him.

We continued our journey to the pub with the pup for a pint..