Adventures in Edinburgh with a Wee Dug Part 2

Edinburgh is the capital of Scotland and one of the most beautiful cities in the United Kingdom. We arrived into Edinburgh from London by taking a 4.5 hour long train. The ride was pleasant and a great way to see the beautiful green countryside of the UK. Luckily, dogs are allowed to travel on trains free of charge in the UK and each person can bring up to two dogs. Although they don’t need to be in a carrier, dogs must be kept on a lead (leash) at all times. Just make sure your dog is well behaved enough to travel because if they are a nuisance or a danger to other passengers you will be asked to remove your dog from the train. 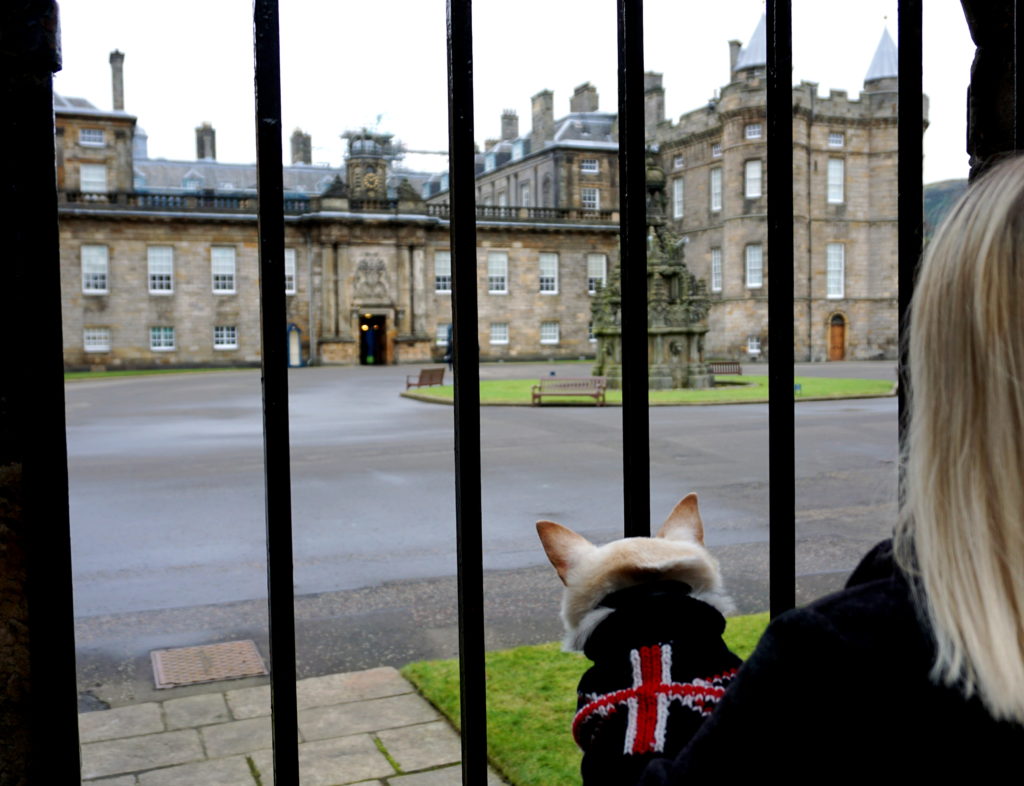 The Airbnb we stayed at was just a few steps away from Holyrood Palace and Arthur’s Seat. The Queen of the United Kingdom, Elizabeth II, spends a week at the palace from the end of June to the beginning of July each year. Dogs aren’t allowed into the palace gates so we took a pic with Coco outside of them in his new wool UK national flag sweater we found at a TKmaxx while we were in Windsor. 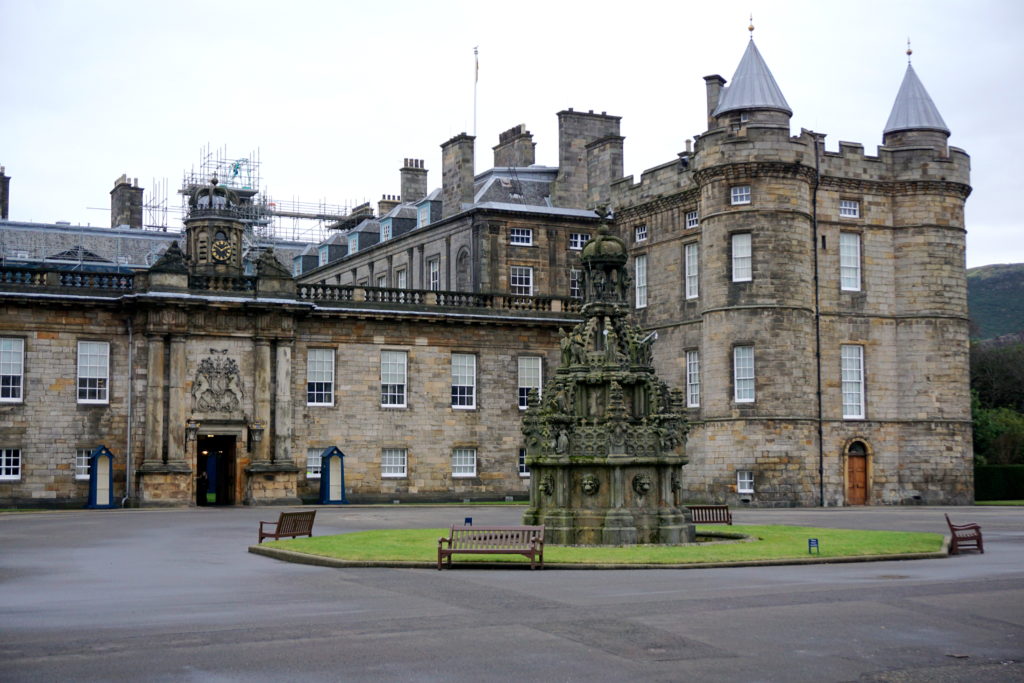 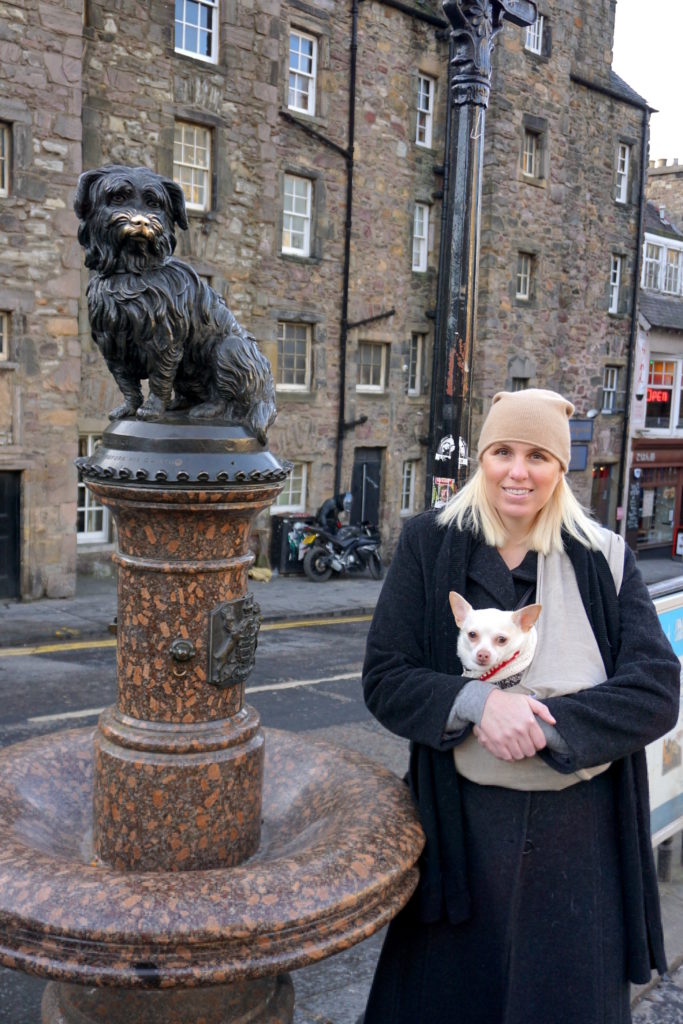 Coco gets a new idol! This is a bronze statue of the most famous dog in Scotland, a Sky terrier named Bobby. Now there are two different versions of this little dog’s story.

The most famous story is about Bobby holding a 14 year vigil on his owner’s (police officer named John Gray) grave (buried at Greyfriars Kirkyard) until his own death in 1872. This bronze statue was built in 1873 as a celebration of his loyalty to his owner. 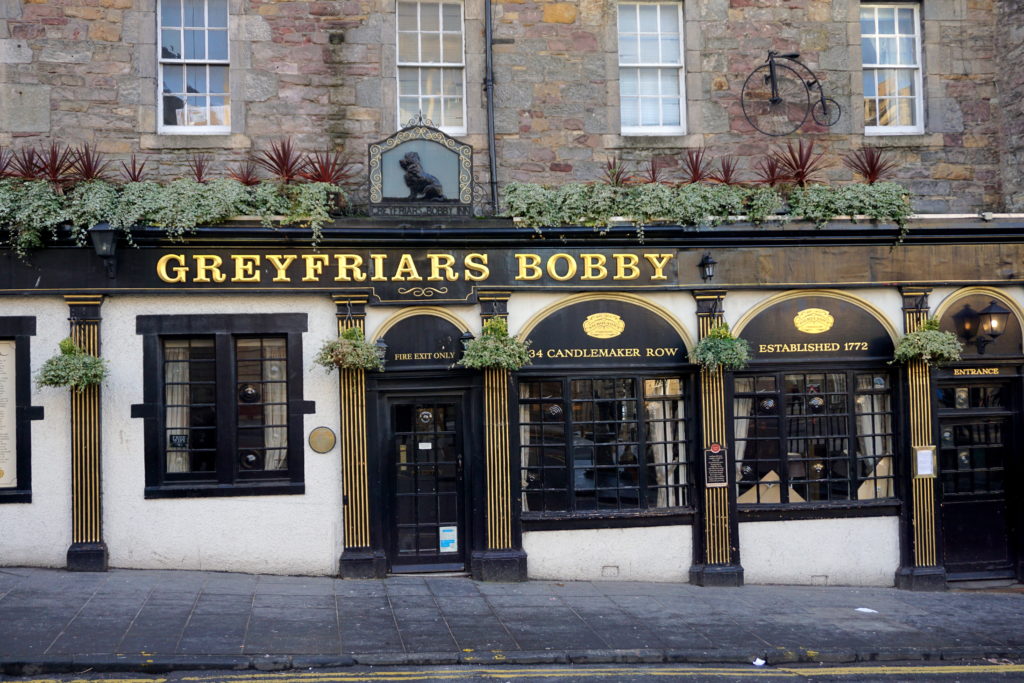 Situated next to the statue there is a bar named after Bobby you could stop off at for a pint. 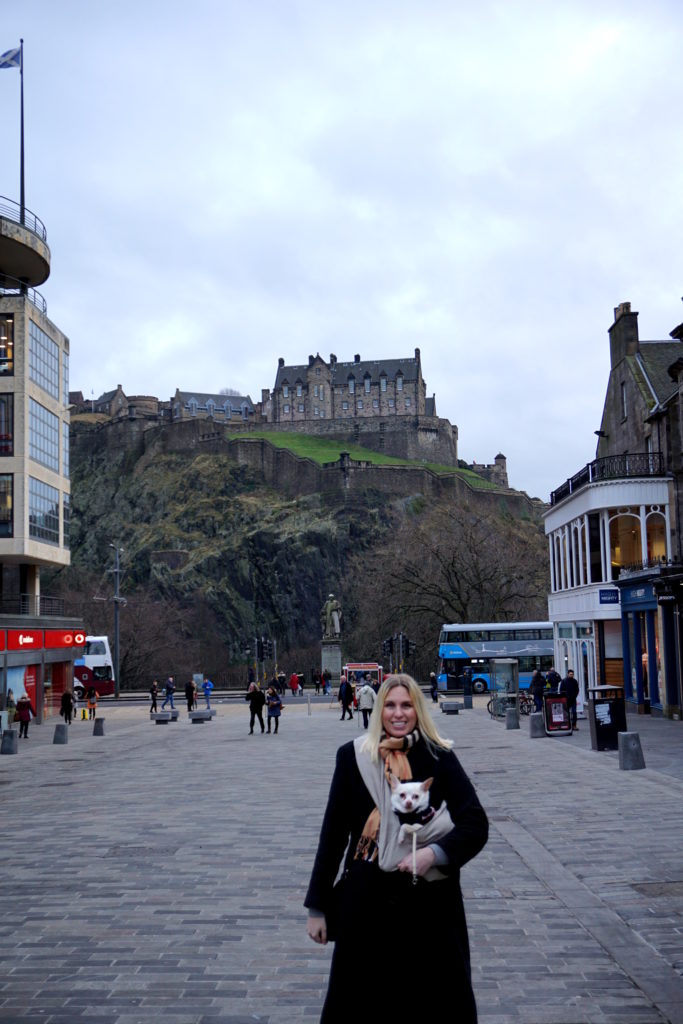 On this side street perpendicular to Princes Street allows for a great view of the castle on the sloping hill. 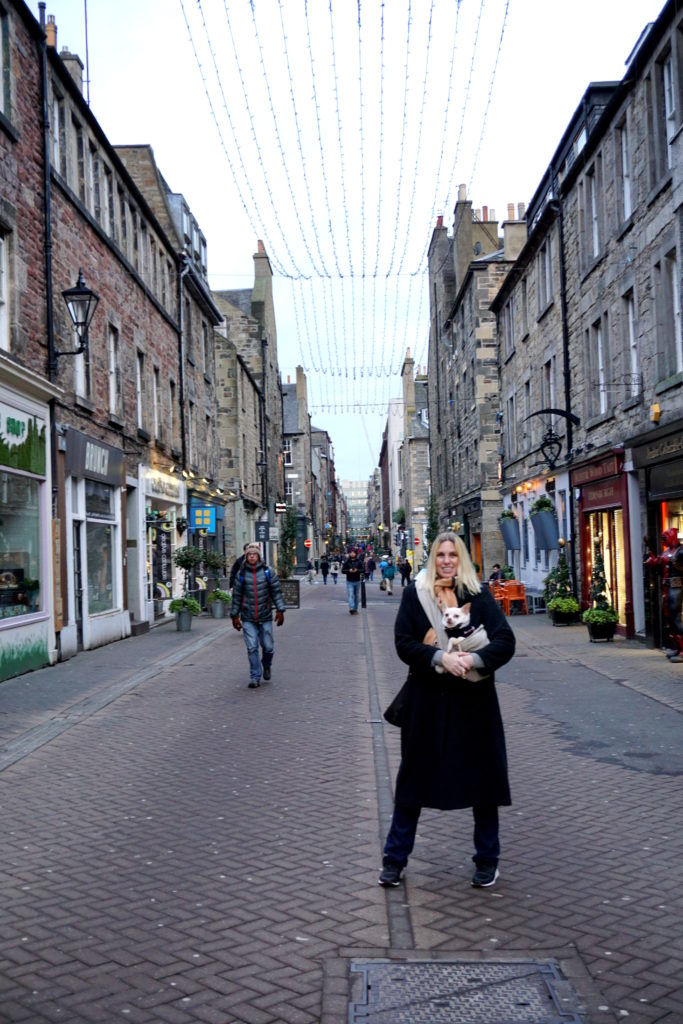 Although we preferred the Gothic old town, the Georgian new town has a lot of great shops and restaurants we loved going to (most dog friendly). It’s definitely worth a visit. 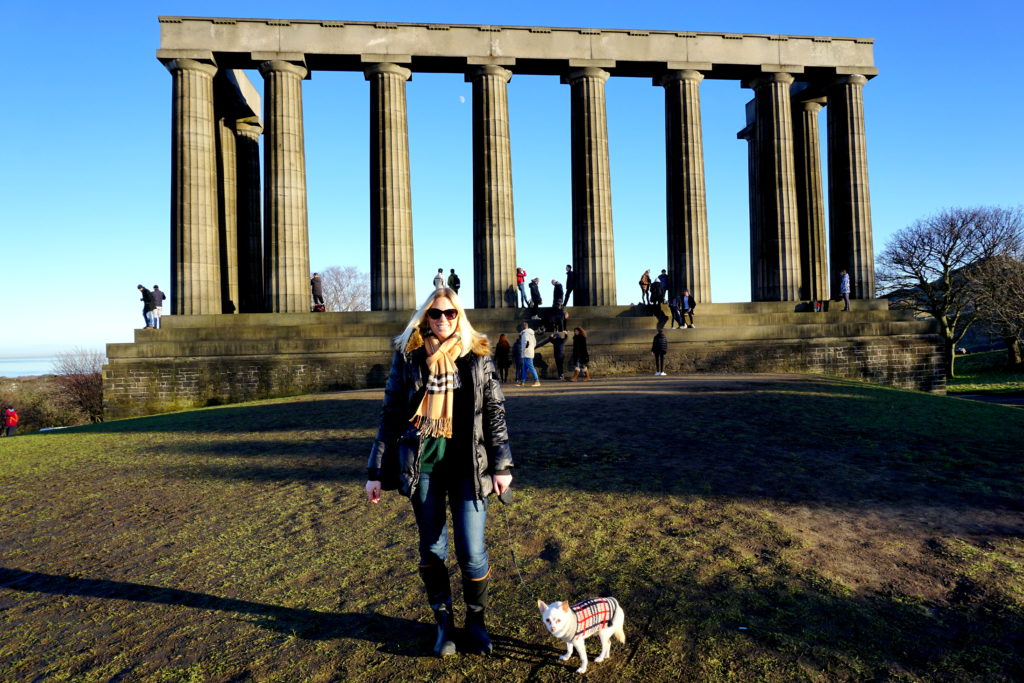 If you continue east on Princes Street from the city center, for about a five minute walk, you will come across Calton Hill. There is a stone staircase you can take up that isn’t that bad for dogs to climb themselves. Behind us is the national monument of Calton Hill, built to remember the fallen of the Napoleonic wars. It looks so much like Greece’s Pantheon. 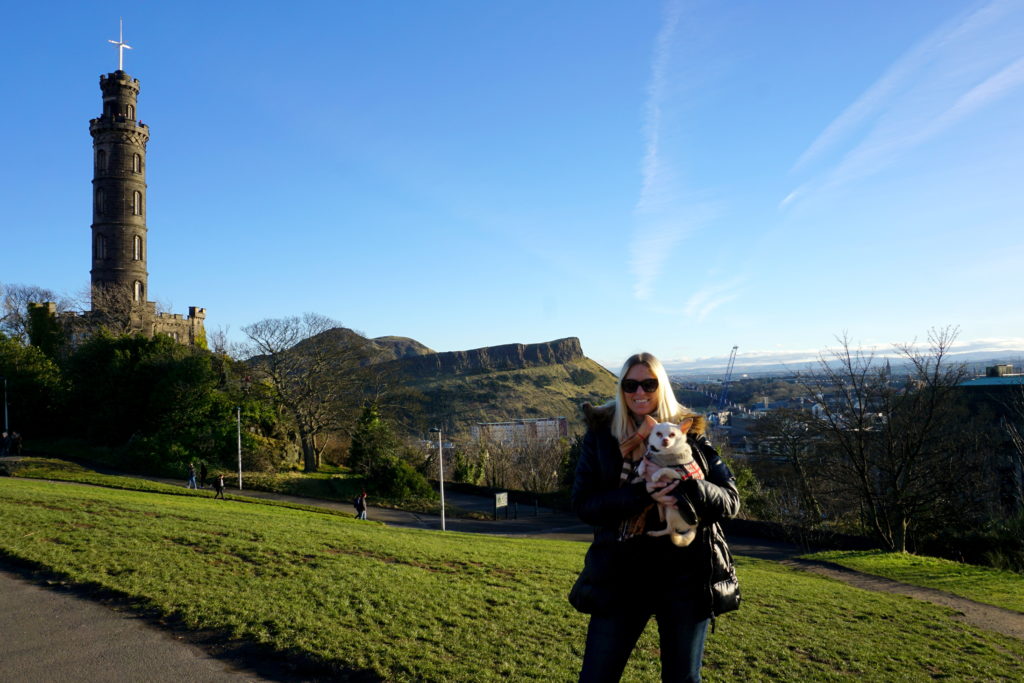 Calton Hill is one of the main hills in Edinburgh and located right in the city center. Next to the national monument of Calton is the Nelson Monument. It was built to commemorate Nelson’s victory over the French and Spanish fleets. You can climb to the top for an even better view of the city, but you can’t bring the dog up with you. 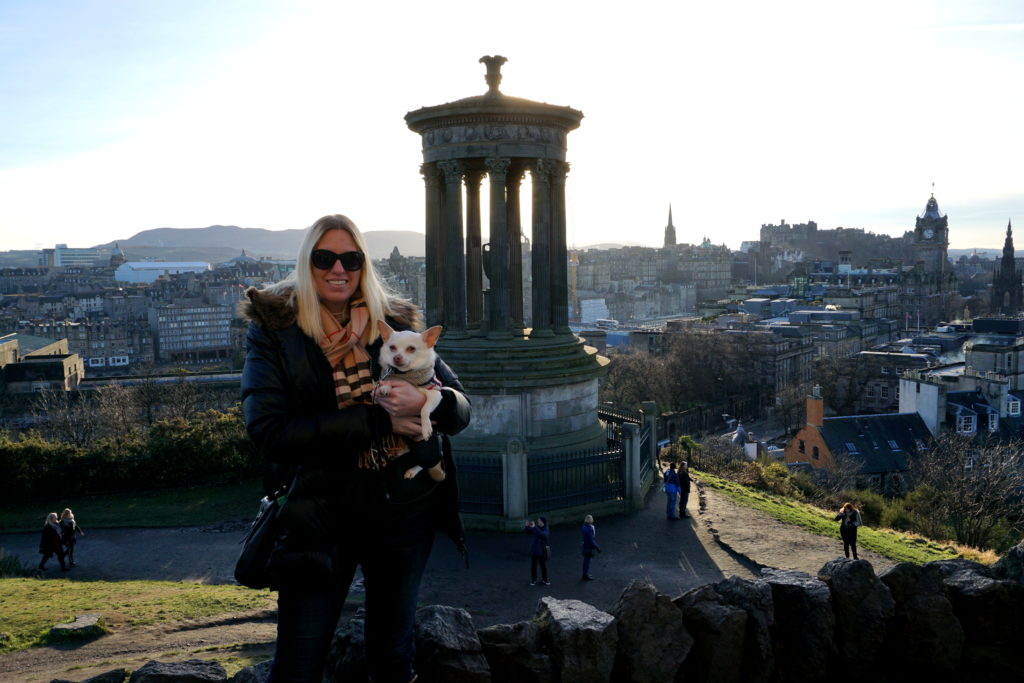 The view overlooking Edinburgh with this Dugald Stewart Monument in the foreground is just amazing! The monument was built as a memorial to Stewart the Scottish Philosopher. 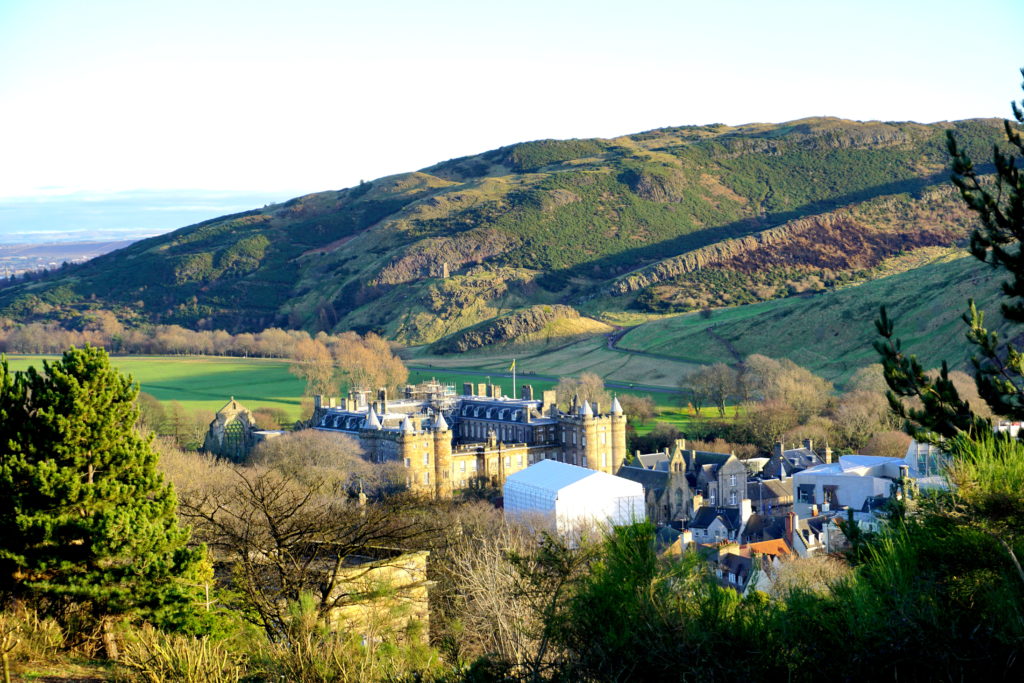 My favorite view from the hill was overlooking Holyrood palace and Arthurs Seat.

Edinburgh is such a fascinating city full of cobbled streets, hills, dog friendly pubs with amazing local beers, and impressive history. Although I recommend you check out these top sites I also recommend you have an adventurous mind and don’t follow any guide. Our favorite thing to do was just get lost wondering the city with our pup.  You will be surprised on what you will discover hidden away on side streets and what you can learn from the locals.