Adventures in Edinburgh with a “Wee” Dug Part 1

We decided to stay in Edinburgh, Scotland for two months in the winter. When we went through customs to get into the UK they gave us a stamp that allowed us to stay for 6 months, which they don’t always do. It’s up to the discretion of the customs officer on how long you can stay when you cross the border. The first time we went into the UK, a year earlier, we were only allowed 3 months. Before we passed through the border we had originally booked three months in London but then booked an extra month at our Airbnb in Shoreditch. Since we had two extra months we decided to spend it in Edinburgh which turned out to be a great decision. 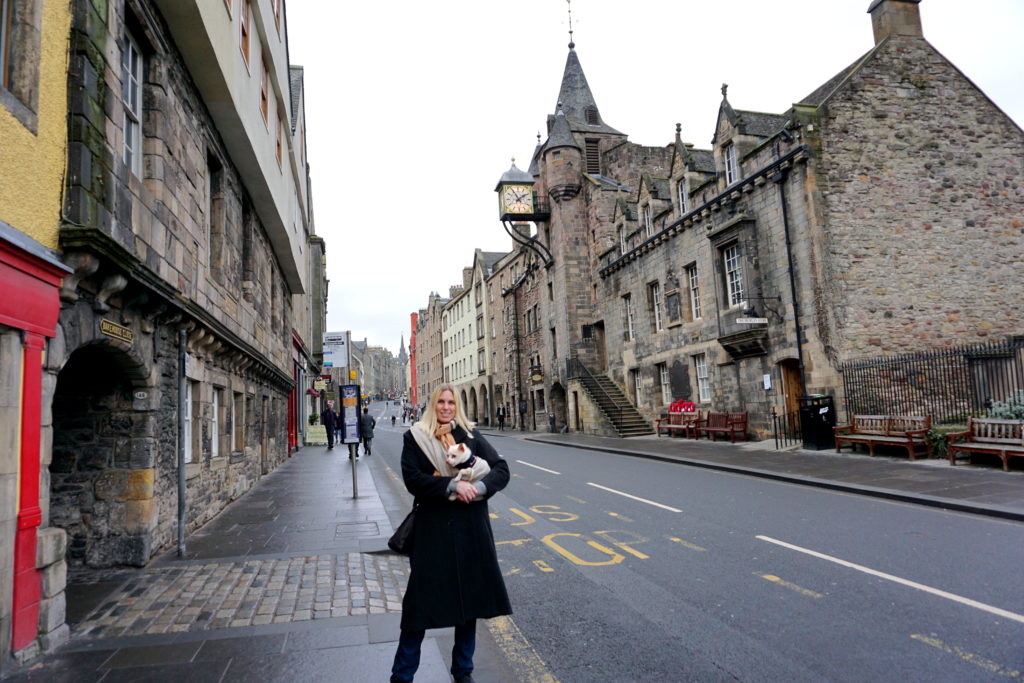 The first time we went out we were surprised to see so many dogs out in the town with their owners. Most of them were so well behaved they were allowed off leash. Coco is a pretty great dog but he doesn’t understand how roads work so I could never let him off leash.

This road in the pic above (the Royal Mile) is in the old town and leads to an uphill walk to the castle. I would usually carry Coco for most of it so he wouldn’t get exhausted. I bought a linen sling from etsy that has saved my back from carrying him (worth every penny). He loves sitting in his kangaroo pouch and will scratch my leg a few times to pick him up when he is feeling a wee bit lazy. 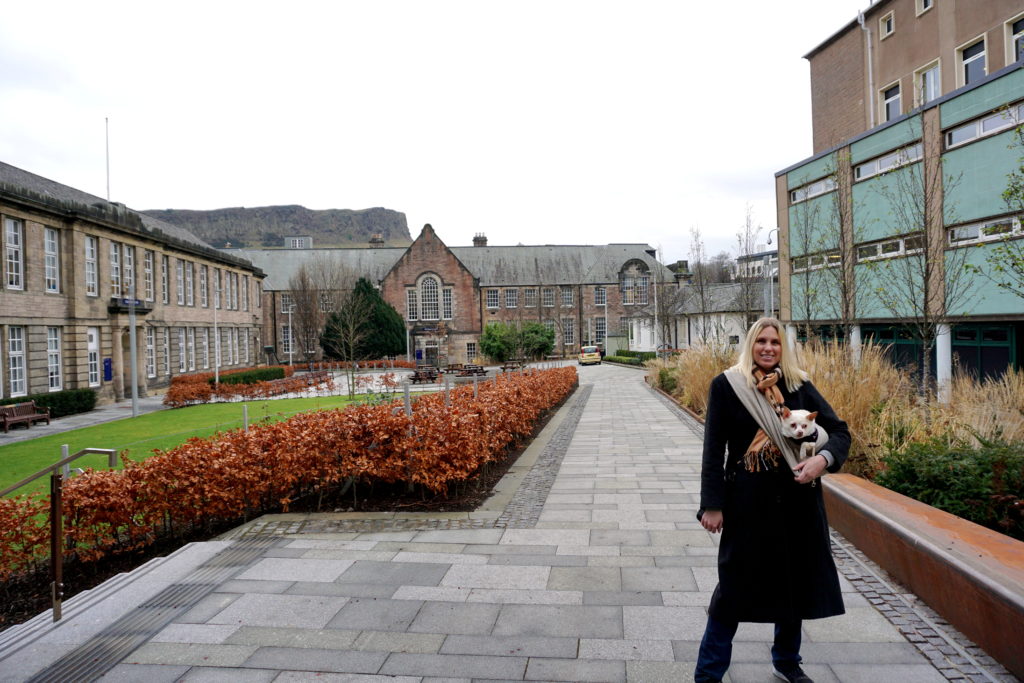 We came across an open gate while starting our walk up the hill that lead to The Moray House and gardens. Built in 1625 it is considered the “handsomest house in Edinburgh.” 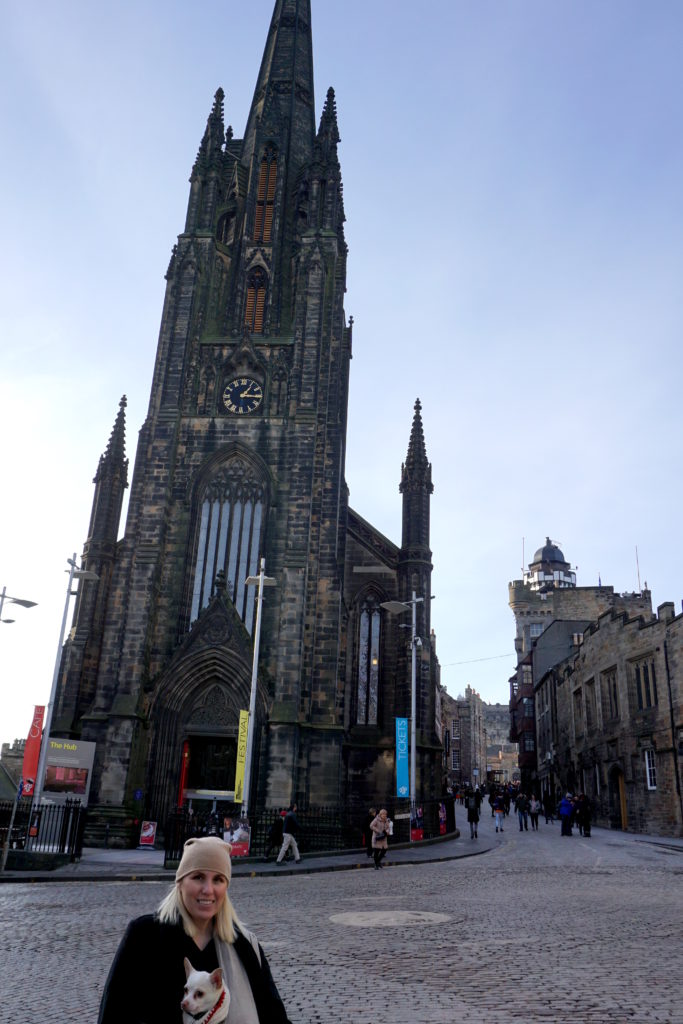 As we continued our uphill walk on cobbled streets we came across many beautiful cathedrals. I love the cobbled streets but would never attempt to wear heels on them. I definitely recommend you leave them at home if you plan a visit. We saw a few women trip on the stones trying to look cute in their heels (so not worth it). 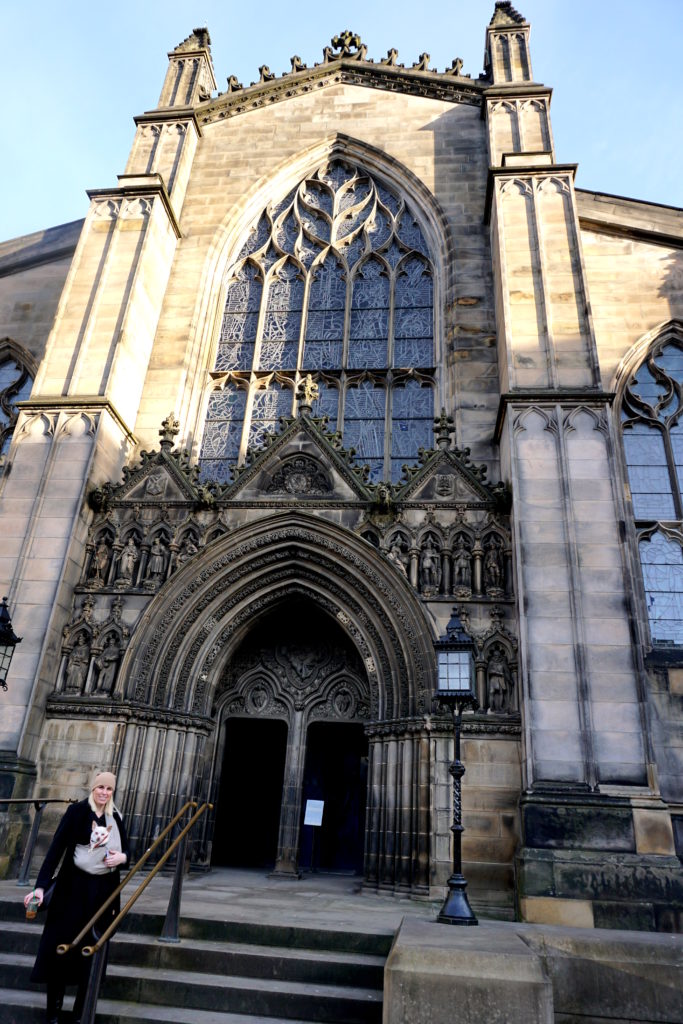 Another cathedral we saw on our walk up. 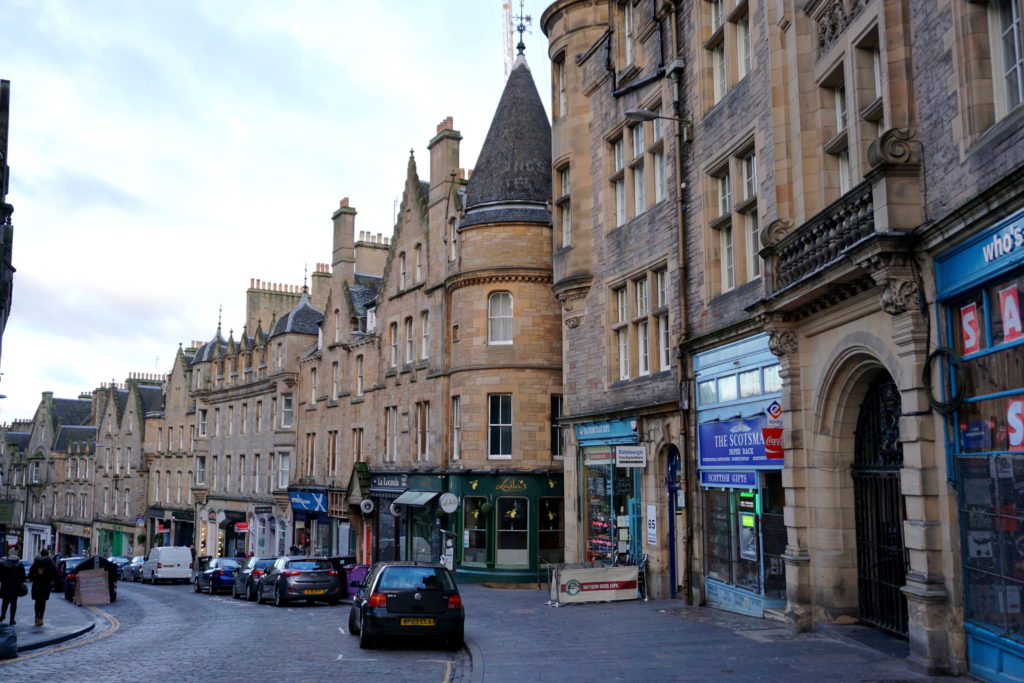 Don’t forget to check out the side streets while walking up the hill. We found some of the best dog friendly bars and restaurants while exploring them. On this street (Cockburn) there is an amazing little breakfast place called Southern Cross Cafe with locally sourced food. Don’t let anyone tell you Scottish food isn’t good. A lot of it, especially in small towns, is locally sourced and delicious. 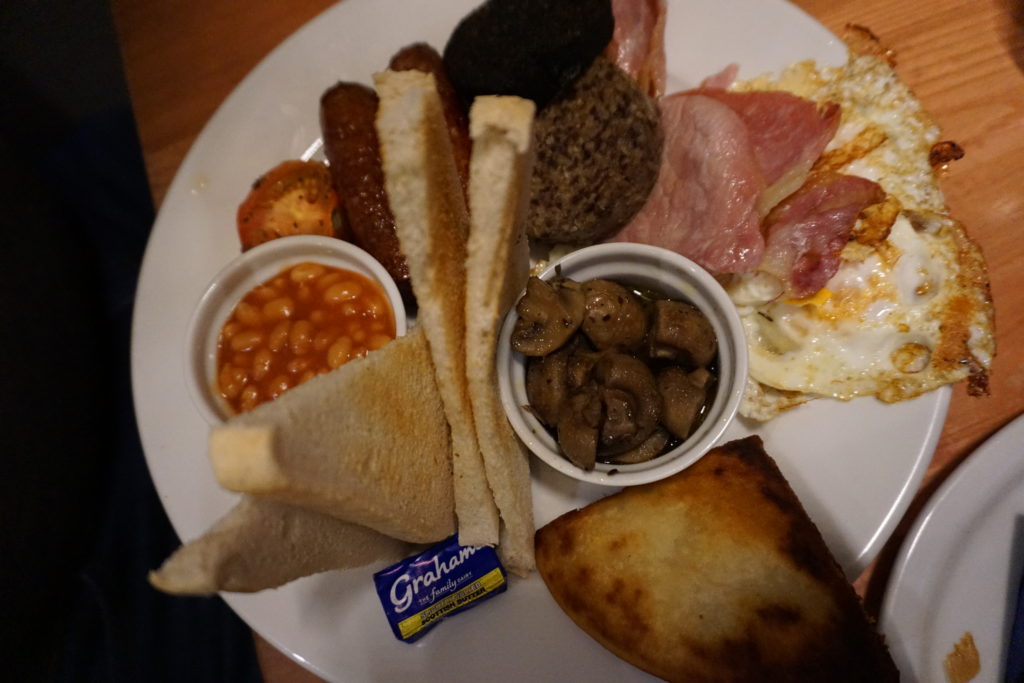 The portions are large and we split the Scottish breakfast. The black thing is blood pudding and the round brown one is haggis. I was surprised to find I loved haggis even though it’s made from sheep’s pluck (liver, heart, and lungs). At least it has an artificial casing now instead of the traditional animals stomach. Scott’s also love haggis and you will find it on almost every menu that serves Scottish food. 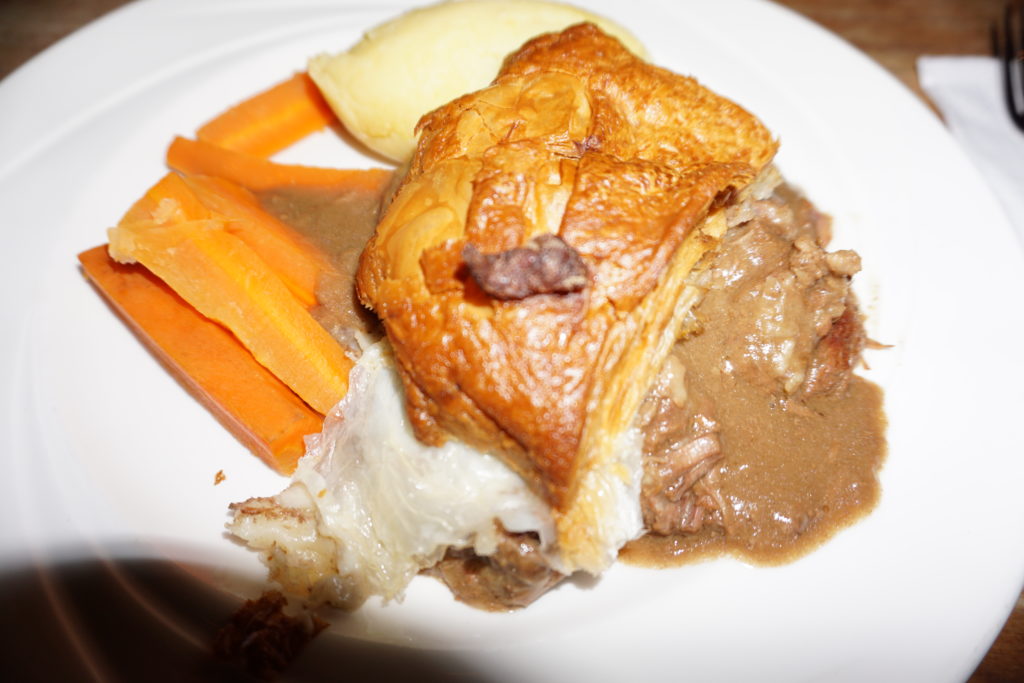 I also loved ordering steak pies. The one in this pic is one of the best meals I ever had (drool). Everything was locally sourced.  The beef is usually served in a gravy, with mashed potatoes, and topped with a pastry crust.. 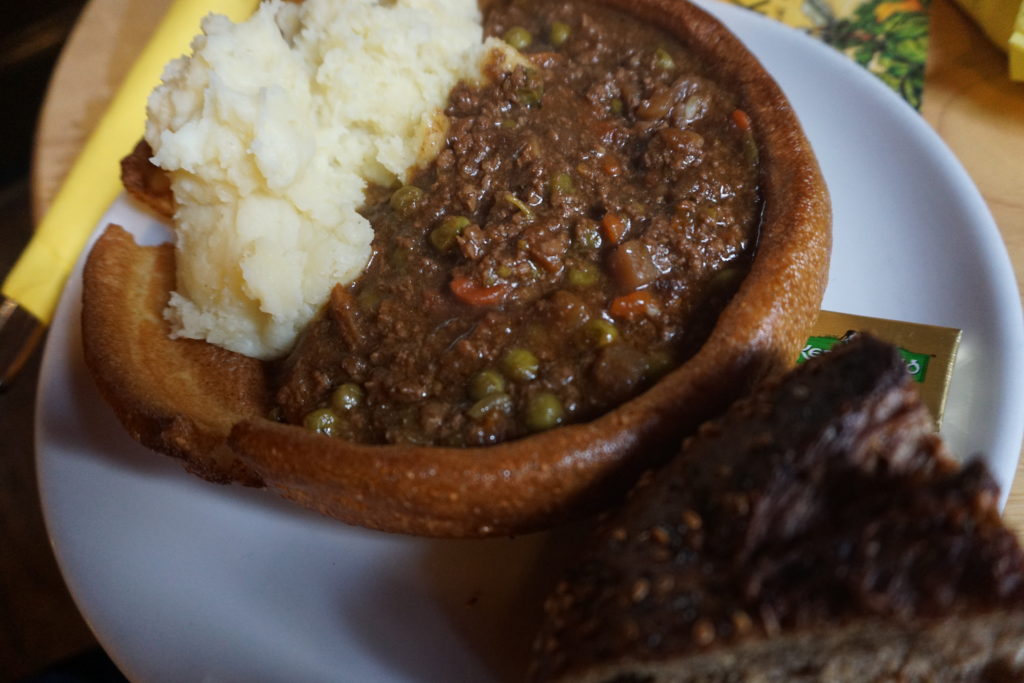 or served in a pastry crust. 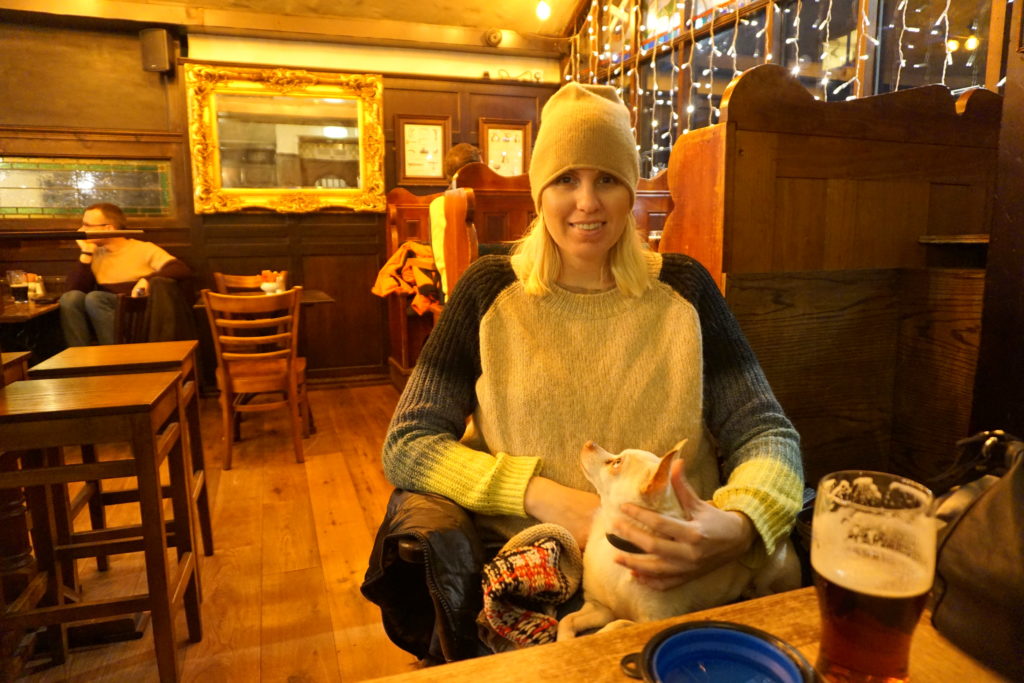 We found most of the bars and restaurants to be dog friendly in Edinburgh. We usually saw a “Dug Friendly” sign on the doors of bars and restaurants that allow dogs. Some of the one’s that didn’t have the sign also allowed us inside with him. Scott’s love bringing their dogs out to the pub with them, and we always saw them when we took Coco out. There weren’t many Chihuahua’s in Scotland, from what locals told us, so Coco got a lot of attention and he loved every minute of it. Some younger guys asked if he was “one of those Paris Hilton dogs.” 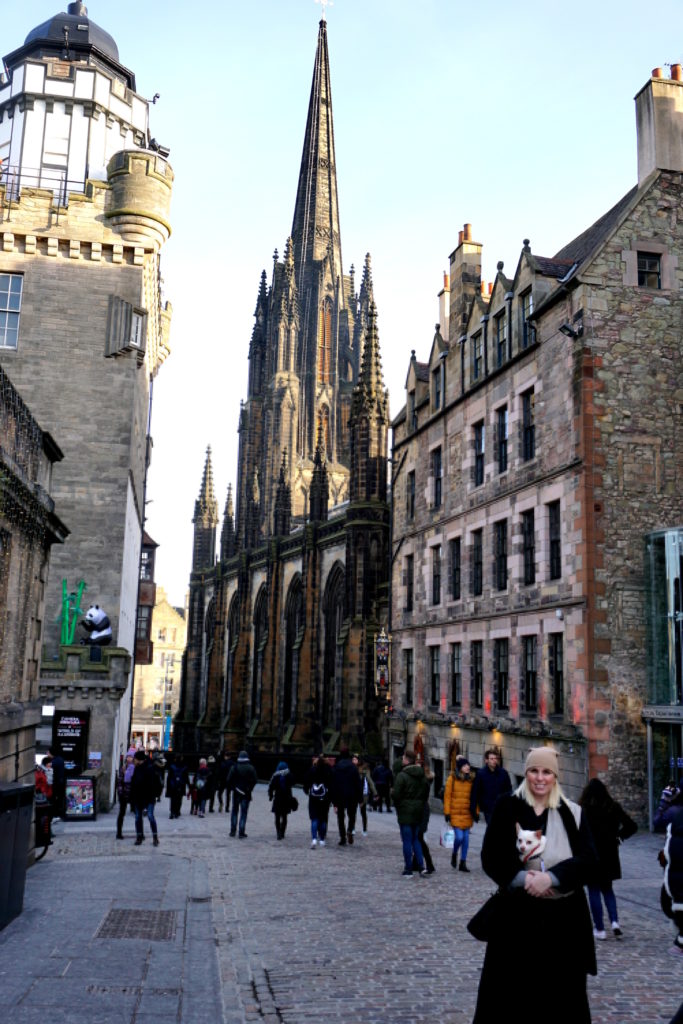 Almost to the top of the hill now with another view of the cathedral behind us. 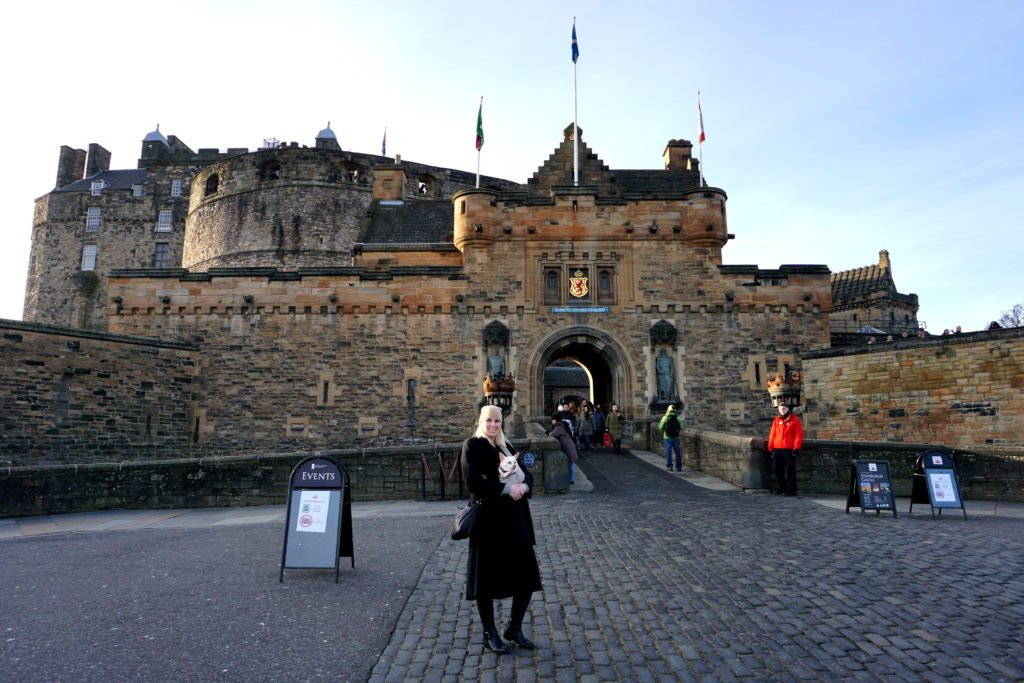 Perched on the top of the hill, and overlooking the old town, the castle blew us away. We walked up to the castle signs and found out no dogs are allowed into the castle walls (I have taken him into a castle before in Limerick, Ireland so it was worth a shot to find out). So we went back another day without the dog to spend time in the castle. We spent about 2.5 hours inside. 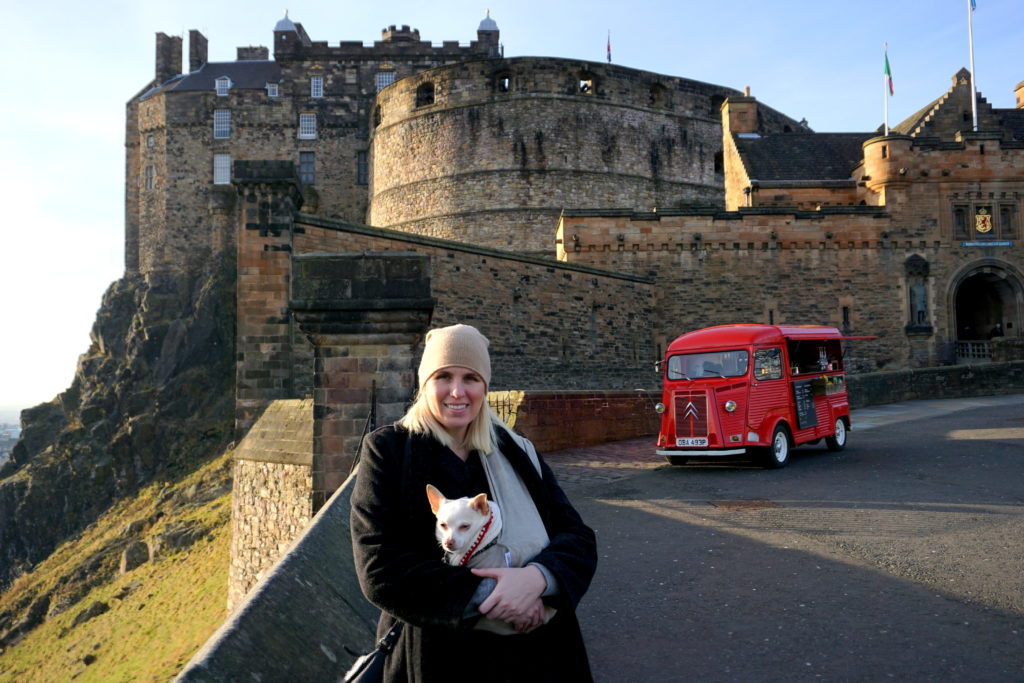 Here is another impressive view of the castle situated on top of a sloping rock. 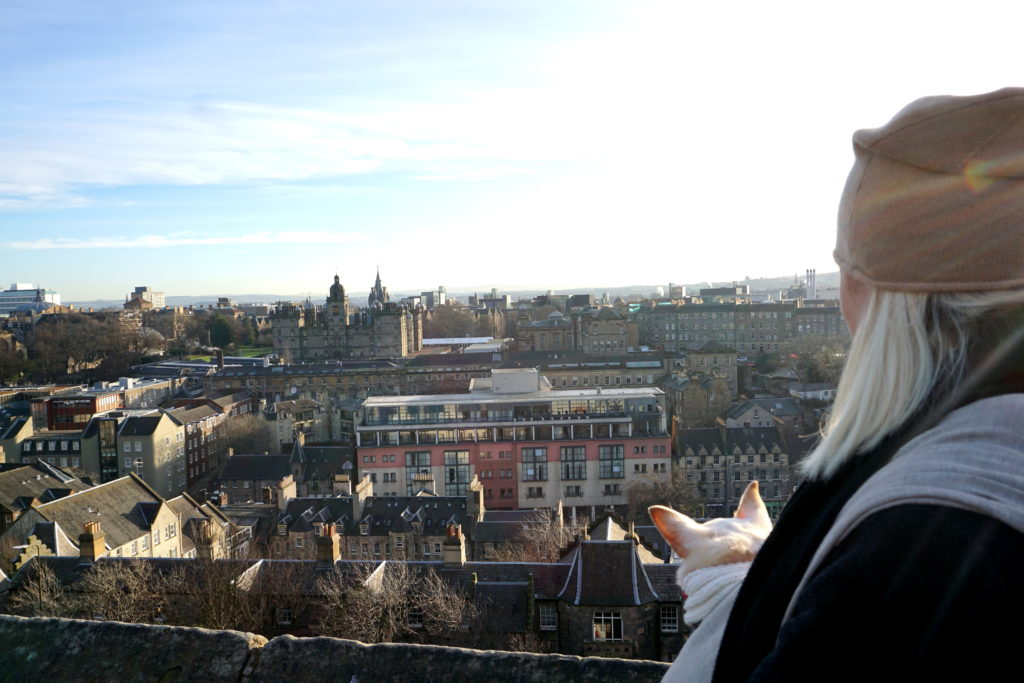 We spent hours enjoying the view of the city from the castle.

If you are going to Edinburgh the place we stayed at was wonderful, cozy, and right next to the Palace and Arthur’s Seat. I highly recommend it!
Edinburgh Airbnb